How about publishing a children’s book?

They say everyone has a book inside them, and that’s often about where it stays. As Pink Floyd said on Dark Side Of The Moon: Plans that either come to naught or half a page of scribbled lines. But, sometimes, it’s really just a matter of time. Here is the story of how my first illustrated children’s book reached publication. 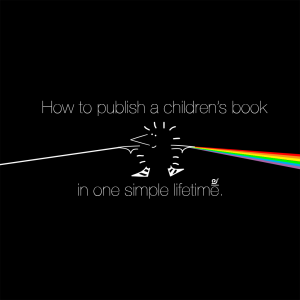 Read all about it.

In August 1982, The Chard and Ilminster News carried an article about a strange looking creature with a big nose. That character was me, and the article was to introduce to the world another big nosed individual called ‘Henry the Hedgegnome’, a cartoon hedgehog that I had been drawing since the late seventies.

Being a local paper, my name was obviously spelled incorrectly but, except for that, it seemed to get everything else right. The bit about waiting for my exam results was accurate, although, when the results did arrive they suggested that the examiners had been marking different questions to the ones I had answered. Consequently, the university system felt it unwise to trust me with any more education and encouraged me to plan a career elsewhere.

With the door to academia well and truly slammed in my face, I found myself looking for work and soon found it in a sector that I held dear; namely, the first company that would give me a job. From that point I busied myself with growing older while getting paid to do so.

When the film of this story is made, this is the bit where we will see a montage of me working industriously as the years fly past (imaginatively illustrated by pages flying off a calendar) and the actor’s hair going grey.  A parallel scene will show Henry the Hedgegnome living alone in a dark attic like some long forgotten Gollum.

About time. Lots and lots of time.

During the intervening years, it was occasionally suggested by my mother, brother and some old school friends that I should publish the Hedgegnomes, and I always agreed with them but struggled to find a suitable format. Living in a town void of any publishing industry in which to seek advice, and with no contacts or any idea about where to start I might as well have wanted to build a nuclear power plant as publish a book. How do I illustrate it? How do I lay out the pages? How do I submit the manuscript? Where do I send it? What will it cost? And that is how it remained while I awaited the invention of the internet, digital imaging and print on demand publishing. Then, last year, a couple of people triggered the resurgence of the idea to publish. First, I bumped into an old school friend whom I hadn’t met or spoken in about thirty-five years. Oddly, the subject of Hedgegnomes soon arose, and he grabbed a pad and a pen and drew Henry. Perfectly. First time and without hesitation. At that instant I realised just how strong a character Henry was. If someone who had had nothing to do with Hedgegnomes and had not thought of them for thirty-five years could remember exactly what they were like, then surely these were characters that captured the imagination of children and stayed with them into middle age. The other person was my granddaughter who, like so many children, had an enthusiastic love of Mr Men bedtime stories. I also enjoyed these books, although, while reading them, complete with a full cast of silly voices, snorts and roars I invariably got told off by her mother because it was meant to be quiet-time. However, the seed was planted. Short, simple, illustrated tales that could be read to a child by an adult or read by the child themselves as they began to learn to read. I had my format.

When I began to illustrate, I initially turned to Photoshop, a program I have been using professionally as a photographer for about twenty years. The results were some rather ugly creatures that had none of the character or simple expressiveness of my early pencil drawings. Then, I began experimenting with a program called, appropriately, Illustrator. The clue’s in the name, and I could now draw Hedgegnomes digitally while retaining the hand drawn look.

Bedtime stories about a little hedgehog in stripy socks.

Four decades after the first sketches, Henry the Hedgegnome is now in print and pixel, available around the world in paperback and eBook. It may be the onset of a mid-life crisis that has spurred me into action, but something is definitely happening. I may yet get a sports car, but for now I am excited by the high-octane adrenaline-filled rush of writing children’s books. Why children’s books? Simple. They say you should write about what you know. Not only have I served a full and lengthy apprenticeship through several colleges of infant and junior education, but even now I score very highly at being a child.

Some people maintain that I still am a child, and the degree to which I find humour in farting or turning a sock into a puppet would suggest they are not far wrong.

I have always said that even if I live to be a hundred, I will die with the heart of a child.

So, there you have it.

The secret of writing and publishing an illustrated children’s book is a simple four stage process:

If you have young children, grandchildren, nephews, nieces, friends with kids, neighbours with kids, an interest in little funny characters or would just like to own a first edition of the first Henry the Hedgegnome story, it is available from Amazon.co.uk, Amazon.com, Kindle and Apple iBooks, or it can be ordered by most good bookshops.

It would also be appreciated if you would leave a review on any of the aforementioned sites.

More information and links to buy the books can be found on the Hedgegnomes website at www.hedgegnomes.co.uk where you can also sign up to receive an occasional newsletter and notification of the release of new titles. If forty years for the first book seems a bit excessive, new books will now be released a bit quicker. The next story is planned for publication very soon.

And finally, in the tradition of this world of social interaction and calls-to-action…